Excerpt from Chapter 3 before paid edits :-\ and after online corrections :o/

Imagine an early Muskoka summer of 1973

The Red Hare was a weekly dining spot for the Fletchers.  The Young and Fletcher children had grown and the parents had become good friends.  They would still gather for Sunday brunch after mass.  Despite their original agreement, Carl refused to take Matthew's money when his family ate there over a decade after Matthew completed the renovations.

Sometimes Father O’Reilly would drop by for a coffee and cookies. Mrs. Johnson would stay for a quick tea after she dropped off Sera from her care while the rest of the Fletcher family had been at church.  She would then leave shortly after to return to her bedridden husband, Peter.

Sera, Dela, Gwen and Amy would wander upstairs to the Young’s apartment so they could play dolls or beauty parlor.  Over the years, Amy and the twins enjoyed sitting for hours gossiping, brushing each other’s hair, applying nail polish and scheming ways to annoy the boys.  Nine year-old Sera didn’t care for the strong odor of the nail polish or the constant chatter of the older girls so she would retreat back downstairs with the adults.

One day she made her way down to the dining room where she wandered from table to table, breathing in the aroma of sawdust and fresh paint, gazing at the newly mounted prints of flowers, birds, dragons and other creatures.

Jenny Young stopped beside her on her way to the kitchen for a fresh pot of coffee.  She was an attractive woman whom Sera rarely saw out side of her waitress attire.  She always had her silky black hair tied back neatly or in a bun.  Jenny performed her work gracefully and with a smile.  Being third generation Chinese-Canadians, she and Carl spoke English with barely an accent.

“The what?” the girl responded, awaken from her colourful, fantastical reverie.

“The Chinese Zodiac.  The animals that represent each year in the twelve-year cycle.”

“Sure.  I think the paintings are cool.”

"You do, eh?  Well, come with me young lady," She led Sera to a table in the back corner and stood with her in front of it.

“That was the year we opened the restaurant.  That’s why it’s called the Red Hare.  Red for good fortune and Hare for.. Rabbit, the year of the rabbit.”

“You were only a small baby in your Mother’s belly when we had our party that year," her eyebrows lifted as she recalled, "It was a very snowy night. We were worried no one would show up.”

“Yes, I remember Dela and Gwen telling me that. It was their first buffet experience and they got to meet Amy.  Mom and Dad have some photographs in our parlor.”

“It was a very special night and the start of a good friendship between your family and ours.”

Sera smiled up at the lovely Mrs. Young who was dabbing at tears in her eyes. She smiled back and sniffed,  “We are very happy to know you and consider ourselves very lucky.”

Jenny patted Sera on the shoulder and continued to the kitchen.  When she returned with an orange soda and a couple of large picture books, she found Sera still standing in front of the Rabbit booth.

“Here, Sera,” she said smiling as she directed the girl to sit down, “Why don’t you sit here and read while the 'old folks' are talking?  This can be your special table.  We will reserve it for you every Sunday.”

Sera obliged, smiling at Jenny's pretty face then down at one of the books she had set on the table.

“This is a book about the Chinese Zodiac.  Amy used to read it when she was your age.  I’m sure she will be happy if you read it while visiting us.”

Sera ran her pudgy hand across the smooth, colourful book cover.  She slowly opened it and gently flipped the pages.  She was greeted by lovely drawings accompanied by Chinese and English text and a few crayon scribbles. The latter, thought Sera, were likely made by Amy.

“Thank you, Mrs. Young,” she said looking up.

“My pleasure, Sera. Here’s a soda to keep you refreshed and a couple of quarters for the music box.”

The girl looked up with a broad grin, “Wow, this is great.  Thanks!”

Mrs. Young continued with her work and stopped from time to time at the Fletcher’s table to join in the conversation with Marie, Matthew, Mrs. Johnson, Carl and the boys.

Sera was so engrossed with the illustrations and text in the Zodiac book that she barely noticed when Fathers O’Reilly and Vinoletti entered the restaurant.  She pumped a quarter into the jukebox and turned up the volume as much as she could to hear “Summer Breeze” over the adult voices and continue reading uninterrupted.  That was until a large body approached and blocked the natural light from the front windows.

“Hello, Gio,” she responded without looking up.  She reached for her soda, took a sip from the straw and set the glass down again.

There was moment of silence.  She flipped the page gently.  The shadow did not move.  Sera breathed in deeply, looked up and forced a smile.

Father Gio Vinoletti was still there in his largeness, planted in front of the booth, gazing around at the new paintings by each of the booths then back again to the one above Sera’s.

“A rabbit.  Hmmm,” he pondered then looked down at her, smiling.

“It’s one of the twelve Zodiac signs,” she responded then returned to the book.

“Ah.. I see.  One above each booth.  Twelve booths.  Those Young’s are a clever couple.”

“Yup, I guess so....” she responded then took a sip of her soda, still looking down.

“So… which one is your favourite then?”

Sera rolled her eyes, corrected her manners before looking up blankly at Gio and forced politeness,  “I guess I’d have to say the Hare A.K.A the Rabbit since that was the year I was born.”

Jenny approached the table with a mug and a coffee pot.

“Hello, Father Gio.  So nice you could drop by today!  Here, sit down and have a coffee.”

Sera’s inside voice was screaming “No! No! No!” but proper manners forced out a “Yes, you may, Father.”

He expertly squeezed himself between the bench and table, positioning himself across from Sera and facing the kitchen.

Mrs. Young said as she headed back through the swinging doors, “I’ll bring some almond cookies for both of you.”

“Thank you!” called Gio after her, slightly leaning over to the aisle.  He smiled at the flapping door.  He sat upright, leaned back and smiled at Sera.

Sera kept reading as he added the cream and sugar to his coffee and stirred it with the spoon.

Why was he always smiling at her?  Creepy, she thought.

A few weeks ago, I had dinner with some artist friends.  They listened intently as I attempted to describe the plots and characters from my hopeful novel.  One agreed to create some drawings based on my cover design ideas.  We met every couple of weeks to review the sketches and agree on changes.  She is a patient, creative friend :-}
On Friday, I picked up the final copy of the favourite one.  Here is a scanned version. 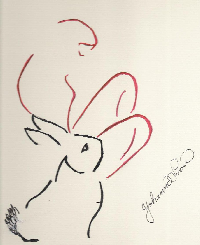 Thanks, Yohanna.
It represents the sadness and loneliness that Sera experienced while missing her lost friend and working out her own philosophies on life and death. One way she coped was to choose the year of the rabbit as one to provide new hope with the arrival of her newborn nephew, Harry.
The next Year of the Rabbit will soon be upon us.  I am not a superstitious person nor affiliated with any organized belief system.  I do respect ancient wisdom and traditions.  2011 will be a hopeful and ambitious year for me, a rabbit hopping into the crossroads of life.

Posted by Unknown at 3:46 PM No comments:

This is rather coincidental yet follows the rabbit and wine themes in my story.As a complimentary gift at a holiday party this weekend, each attendee received a Metrokane Vertical Rabbit.  A what? you ask... For the first few minutes, we shared in humorous (and slightly drunken) confusion while we figured out its purpose.  After more examination and reading the instructions at the bottom, we concluded that it was a high-end corkscrew.  It's cute and all with the rabbit-shaped head and handle for ears.  I look forward to using it over the holidays.  MetroKane Wine Accessories:  http://www.metrokane.com/site_files/wine_tools.aspxThere are no live rabbits featured in my novel yet there is plenty mention of wine :-)
Posted by Unknown at 2:48 PM No comments:

The Year of the Rabbit

A Novel about Fate, Family and Forgiveness

Read the book in one sitting

Reader comment - bit of Sera in all of us

There's a bit of Sera in all of us

Reflected on events that could change the course of your life