It's the last day of September.

It's also the last day for a free Epub copy of The Year of the Rabbit.  While we're at it, you can also obtain a free copy for your Kindle.

A young priest goes through the motions of following the teachings of the church in a small Muskoka town during the 1970s. He finds his true calling through unexpected encounters with his precocious love child.

A little girl tries to make sense of her lonely world and sees the Year of the Rabbit as one of hope due to the birth of her illegitimate nephew.

Thanks for dropping by!

Abuse of Power and Trust

I am troubled by more worldwide reports of abuse cases involving priests.

Does it make you wonder though if their sickness was already present and they chose this vocation or profession because of opportunities to abuse while in a position of power?  Do not forget that we have seen reports of abuse by teachers and other professions.

Yes, the novel leans towards the suggestion that priests should be allowed to marry.  Who knows if that would have prevented the actions by some sick individuals. Would they have eventually abused their own children? 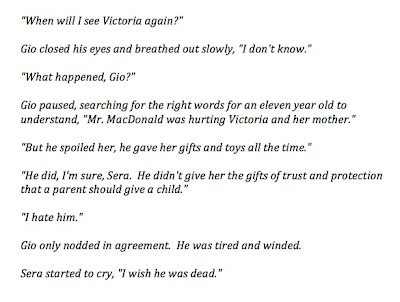 The Year of the Rabbit is loosely based on my experiences growing up in the Catholic Church in a small town and questioning the rules at many turns (but apparently not as spicey and humorous as those by Jenny McCarthy).  It is not intended to insult or show disrespect but demonstrate a growing need for change as was seen in the late 1960s and early 1970s.

Yes, I am a Lapsed Catholic.

Yes, I believe in a woman's right to make choices for her body, her reproductive system.


I knew some interesting priests in my early years.  One who performed the wedding ceremony for one of my family members eventually left the church and got married.
I wanted people to see Father Gio as a lovable, trustworthy character - a human male.  He regrets not acting sooner to prevent abuse in the small town where he served and questions his future in the Church.
Let us not judge Gio for his moment of weakness, a brief encounter with a married woman in 1962.  If he didn't have that night of passion, we would not have gotten to know Sera, to watch her grow and cope through difficult times.  Was it fate or just coincidence? 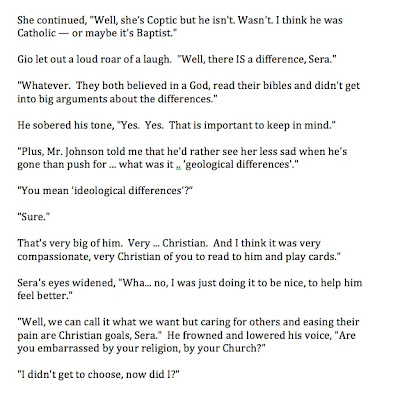 Excerpts featuring Father Giovanni Vinoletti:
You will grow to love Gio.  I have.
Thanks for dropping by and reading this far.  Comments are welcome!
T
Posted by Unknown at 11:19 AM No comments:

This is a celebration of sorts.

It has been a year since the e-book version of the novel was released.  It has yet to achieve national recognition or international acclaim.  Since Flo is so darned shy and couldn't afford an agent or publicist, it has been more of a small town, home team effort.  We still have hopes for this bittersweet, quirky tale. 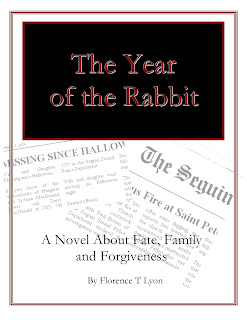 As of September 8, 2012 Flo has decided to allow potential readers to set the purchase price, starting at the Smashwords recommended minimum of 99 cents.  Thank you to Smashwords for enabling a world of indies and satisfying my tree hugging sentimentality.

Thanks for dropping by.  Do come back to read about le petit project for the next two years.

The Year of the Rabbit

A Novel about Fate, Family and Forgiveness

Read the book in one sitting

Reader comment - bit of Sera in all of us

There's a bit of Sera in all of us

Reflected on events that could change the course of your life